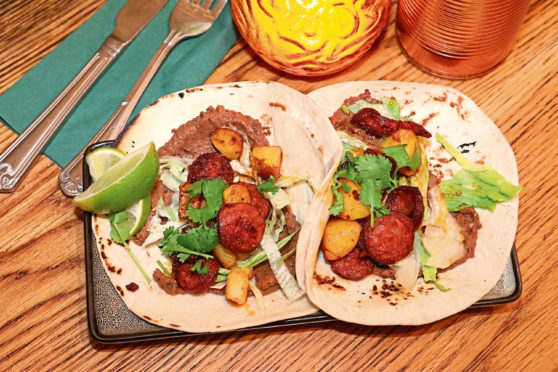 Murray Chalmers heads off to the Más Mexican restaurant on Dundee’s Perth Road this week, to try out their version of “street food”.

The concept of “street food” has become rather amorphous but, in its truest form, has been a hugely revitalising one for our food culture, one that has spread from urban centres to cross the whole country. In terms of food trucks and pop ups it’s something that I hope we will see more of locally; there is nothing more exciting than to wander round a market like the brilliant Bowhouse in Fife and try new things from different temporary food venues.

Well, actually, there IS something more exciting and that’s to do the same in New York, where great food served from trucks is now a city institution, and where a new, more inventive approach to Mexican cookery evolved decades ago.

Meantime here in Dundee the concept of street food (is it the food or is it the location?) also exists between four regular walls and it is to one of these old-fashioned places called a restaurant that we venture today. 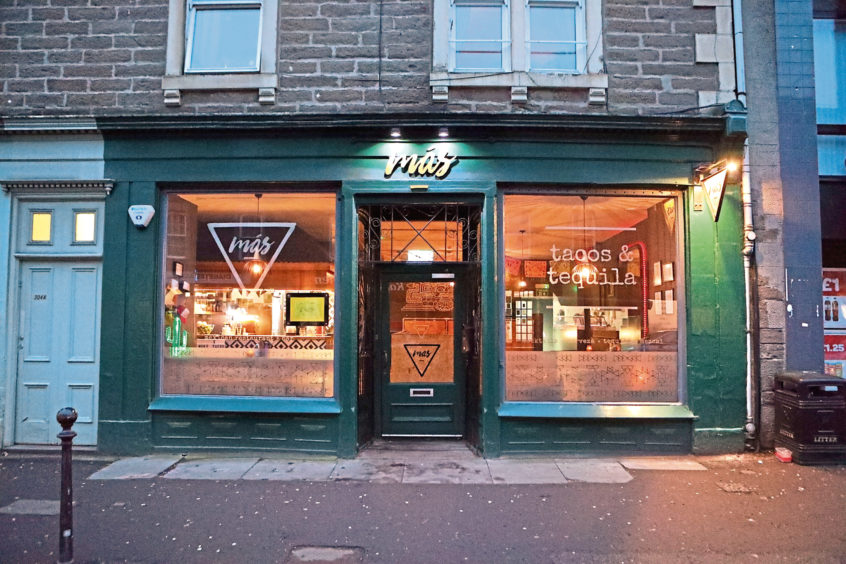 Mas on Perth Road is a Mexican “street food” restaurant serving small portions of cheaply priced dishes and a punchy selection of cocktails; it’s insanely popular on Tripadvisor, with many people making quite bold claims about its authenticity and the quality of the food.

It’s small, loud and boisterous – not the place to go on a first date unless you already suspect your suitor is a bore and the conversation will flag before the first Margarita freezes out your own ennui.

The “décor” is just weird. I remember going in here last year when they seemed to be renovating and there were big pieces of chipboard strewn around; it seemed like a work in progress. 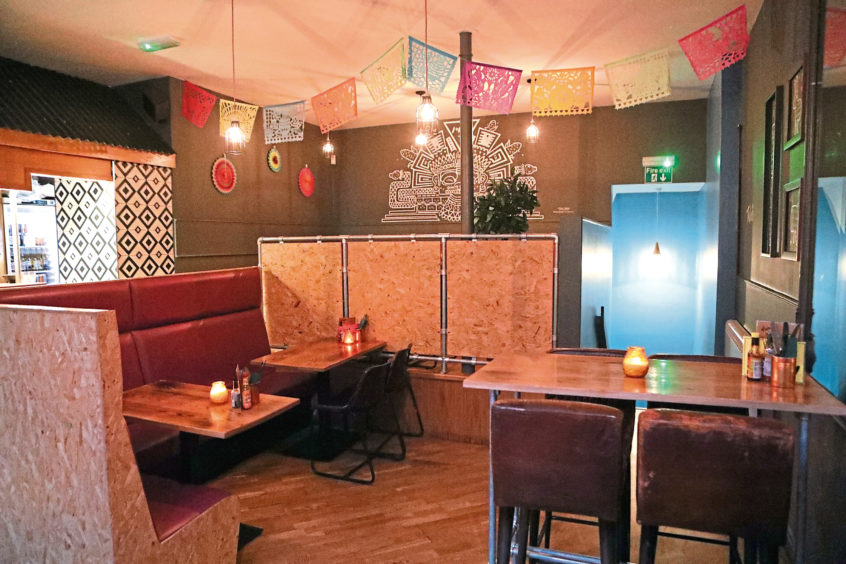 Now, however, I realise this shack-chic is actually the design. It’s horrible; like eating in a series of boarded up shop windows hastily patched up until the storm passes or the glazier starts work.

If it was an idea that had some imagination then possibly they might have painted the panels bright colours; then, after a few tequilas, you’d channel the vibrant, (albeit urban Mexicanno’d) effect of that country’s brilliant architect Luis Barragan. Or maybe they could have had one of Dundee’s graffiti artists in to spray-paint some cheery anarchy around the place.

As it is it just looks like a building site; also, when you walk in the door you are immediately confronted by a tall, divisive partition which feels unwelcoming and (cynics look away) totally bad feng shui. A wall as the first thing you see in a Mexican restaurant? Don’t tell Trump or he’ll want them everywhere! The thing is, it would be so easy to redesign this space and make it work better spatially (and therefore emotionally) – so why don’t they?!

Maybe the reason is they’re doing perfectly well as they are. The night we went we were definitely and somewhat defiantly the oldest people in the room – not just dads down the disco but possibly even grandads.

The proximity to the university and art college, the cheap prices and the ballast of much of the food would make me wager that much of their customer-base is students.

Everyone was certainly having a great time – the decibel level was something that even Bose noise-cancelling headphones would struggle to defeat. I felt old, and then I felt older when I started to worry that the excitable table of eight behind the plywood would actually levitate, their hysteria seemingly winding itself up to cyclonic levels. What a misanthropic grump I felt! But the NOISE! 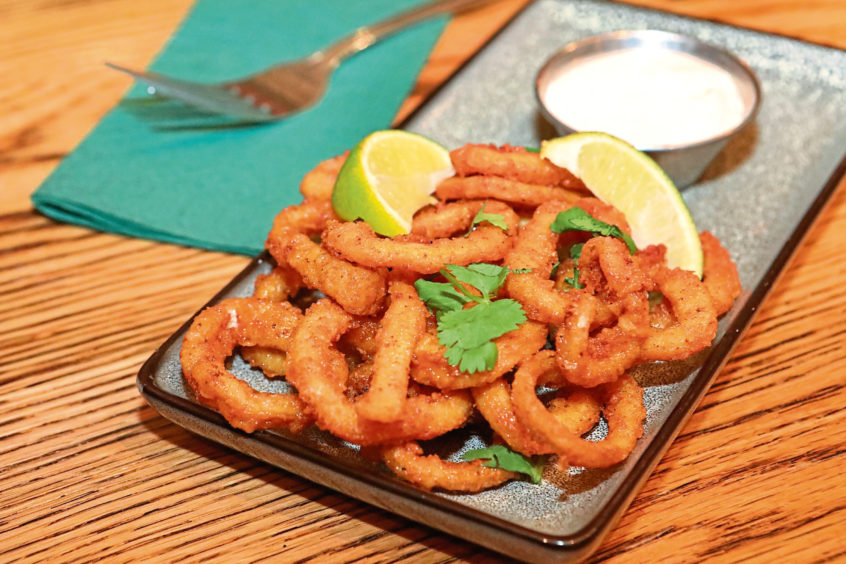 The food had some quite good moments, especially the main courses. My chicken quesadilla (£6.50) was very nice, as was my chorizo taco (£6.50). David’s drunken beans quesadilla (£6.50) was also good although when I tasted it I suddenly felt that all three main courses we had were a bit generic. I don’t subscribe to the cliched, outdated view that Mexican food has to be heavy and greasy and that the flavourings are essentially limited.

Mexican food, to me, is vibrant, fresh and often subtle with its use of herbs and unusual flavour combinations. This was old-school Mexican in that it gave you the sudden hit of heat and heft but with little to surprise or intrigue the palate.

Our smaller plate “starters” were a mixed bunch. The calamari (£6.50) suffered from being small, greasy and flaccid – not a good look for anything.

The guacamole (£4) wasn’t guacamole, at least not in my eyes. This tasted of nothing except browned avocado – no zing of lime or muggy hit of coriander, no zest of vitality or explosion of freshness. There was an air of tiredness about it, like it had been sitting around for a while; same for the bean dip which had a crust forming on top. Nevertheless, a few of the salsas from the trio (£4) were sharp and fresh while a simple dish of spicy potatoes (£3.50) was good. Too many of the smaller dishes come with tortilla chips which brings a dull uniformity if you order more than one. Chilli and agave chicken wings (£5) sounded great but they weren’t available. 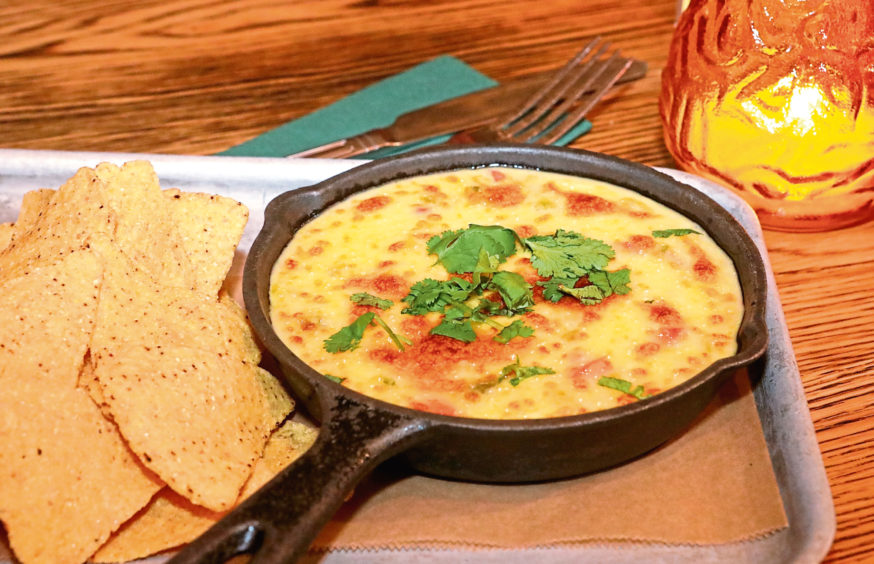 The star was the queso fundido (£7) which was everything you might hope for in January – a gooey, unctuous bowl of melted cheese (here in a vegetarian version without chorizo, as requested) that was as comforting as it was stupefying. I’d come here from a massage in a spa and I could feel my arteries happily constricting again as I used this glorious concoction as a conduit for a million tortilla chips and a first farewell to the January keto diet. Way to go! (By the way it’s worth stating that there is a vegan menu here and a reasonable amount of vegetarian options on offer).

Service throughout was stridently assertive. The food arrived rapidly.

In truth, this isn’t a place for me. But I realise they must be doing something right because they’re obviously popular.

Some of the food is good. It’s just I feel that the wonderfully ALIVE flavours of the best Mexican cookery weren’t here; instead, the obvious spicing, the lack of herbs, the feeling of being weighed down by the food instead of being lifted up and energised by it, the terrible acoustics which meant people seemed to be screaming all the time, the plyboard as design, the general vibe of the place, just weren’t my personal thing.

Certainly this wasn’t street food as I know it, nor was it a great illustration of the sheer joy and variety of flavour in Mexican cookery. It’s not that it’s terrible – it isn’t – just that I don’t quite get what the fuss is about.

REVIEW: Food at Dundee Mexican restaurant that looks like a building site is only ‘okay’ – The Courier