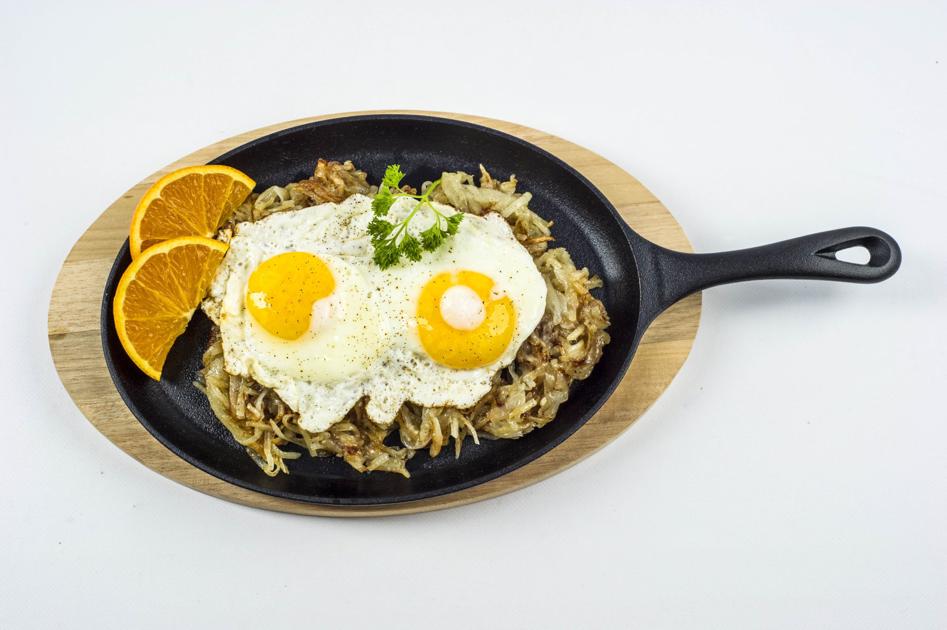 Not thinking ahead about leftovers is one of the biggest mistakes that home cooks make.

The best cooks I know are thinking about the meals they’ll make with leftovers while they are making the initial meal itself.

That might look like making extra protein or vegetables knowing that the following day, they’ll incorporate those into a sandwich or a grain salad. Or that might mean using a neutral seasoning when roasting or sauteing vegetables (or meat) so they can be seasoned in a different way later in the week.

Rolling one meal into the next can take practice, though, so here are 10 ideas for using or spiffing up leftovers. This helps cut down on food waste and your grocery bill, and it also cuts down on the amount of time and mental energy it takes to put food on the table.

1. When simply reheating leftover food and not transforming it into something else, use a cast iron skillet to heat it up instead of a microwave. Microwaves are handy for lots of things, but leftovers are universally better when reheated on the stove. Many leftovers suffer from sogginess, and a cast iron skillet dries food out to caramelize the edges, giving the food much-needed texture. This applies to everything from potatoes to pasta. For some reason, even soup or chili tastes better when reheated in a small pan instead of a microwave.

2. When transforming one dish into another, think about the life cycle of the dish. For thousands of years, cooks have been cooking, say, a whole chicken for dinner one night, making something else on the second night — enchiladas, empanadas, tacos, stir fry — and then making soup or casserole — such as a shepherd’s or pot pie — on the third. It’s good to get into the habit of thinking ahead about how one meal rolls into the next, rather than thinking about each meal individually.

3. Because cooks have been trying to cut down on wasted food since, well, the beginning of cooking, every culture has dishes that are meant to absorb the odd bits left over from last night’s dinner. Two of the best known are likely frittatas (or quiche) and fried rice or stir-fry, which can use up vegetables like grilled peppers, roasted sweet potatoes or sauteed kale, as well as cooked and sliced pork chops, steak, chicken or tempeh.

4. Put a fried egg on top. I think fried eggs can go on just about anything, and I’m convinced that any vegetable can become a hash. I had green beans for breakfast for the first time recently when I sauteed leftover spicy green beans as a bed for, you guessed it, fried eggs.

5. When rice or eggs can’t save the day, flatbread can. Pita, naan, tortillas or a fresh baguette aren’t exactly a meal on their own, but they can stretch yesterday’s main dish into a second night. For example, leftover eggplant Parmesan or meatballs wouldn’t work in a frittata, but they would in a sandwich.

6. Add one element that’s fresh. If you know you have a bunch of one kind of food left over, think of something you could make fresh that would complement it or freshen it up. That could be a freshly cooked batch of rice noodles, bowtie pasta, farro or quinoa that would turn last night’s griddled eggplant or charred peppers into a hearty main dish. If you have roasted chickpeas or sausage, you could serve those on a bed of fresh salad greens.

7. Save the sauce. Leftover salsa can season black beans or a chicken tortilla soup. You could simmer a marinara sauce with chili powder and garlic and transform it into an enchilada sauce. Leftover marinara is also a good base for minestrone. Satay sauce for chicken skewers could then season a rice noodle dish. Ponzu could become a marinade for chicken or tofu.

8. Cheese is your friend. Chopping up and mixing leftovers together might seem like you’re creating a mishmash of textures and flavors, but melted cheese has a way of holding it all together, whether it’s as a pizza, a quesadilla or a grown-up grilled cheese sandwich. If you have a collection of almost-finished wedges of cheese, make a mac and cheese. (Make a bechamel with flour and butter or use cream cheese as your emulsifier.)

9. And then make soup. Or stew. Or minestrone, caldo or curry. At the end of every week, every culture has a soup that gives one last bit of love to all the week’s leftovers. For many years (OK, maybe even still), I got stuck thinking that I have to make a huge pot of soup — probably because soup pots are so large — and then I end up having to throw away that extra soup because I’ve made too much and can’t eat it anymore. Using a smaller saucepan and forcing myself to use only whatever is left over is helping me make more reasonable batches. The key is adding the already cooked ingredients at the end so they are only reheating and not continuing to break down.

10. Some foods are harder to save than others, no matter what you do. Brussels sprouts get more bitter over time. Soggy pasta is soggy pasta. Steamed broccoli doesn’t really hold up unless you’re making a broccoli cheddar soup. Leafy green salads don’t generally hold up from day to day, so keep the dressing and garnishes separate so you don’t have to throw away the whole salad.

This low-carb spin on the Italian classic is filled with flavorful meats and nutritious vegetables. If you’re using up leftovers, add the cooked vegetables at the end so they don’t overcook. You could also start with cooked sausage or leftover bacon and skip those cooking steps. As a keto-friendly soup, this recipe uses xanthan gum instead of flour as a thickener, but you could use a tablespoon of flour before adding the broth if you’re not worried about it being keto.

In a medium skillet over medium heat, brown sausage until fully cooked and no pink remains, about 15 minutes. Drain the excess fat and set sausage aside. Using the same skillet, fry bacon over medium-high heat until crispy, crumble and set aside.

In a large pot over medium heat, melt butter. Add onion and sauté until onion softens and becomes translucent, about 3 minutes.

Add garlic and kale and sauté until kale softens, 3 to 5 minutes.

Pour broth into the pot and add cauliflower, sausage and bacon. Increase the heat to high so the soup can come to a boil for 5 minutes, then cover and reduce the heat to a simmer over low heat. Allow the soup to simmer for 30 minutes. Remove the lid and allow it to reduce for 10 minutes, then whisk in cream cheese. Pour in heavy whipping cream, xanthan gum and stir. Allow 2 minutes to thicken. Serve warm.

— From “Keto Comfort Foods: 100 Keto-Friendly Recipes for Your Comfort-Food Favorites

Use leftover farro — or another freshly cooked grain — to make these patties. Rich with goat cheese and fresh with cilantro, they are a great vegetarian main course served with a green salad on the side. To cook farro, place grains in a large bowl and add enough cold water to cover by 1 inch. Let the farro soak for at least 10 minutes and up to 1 hour to speed up the cooking; drain well and then simmer for 20 minutes in lightly salted water. Taste for doneness — about al dente — and then drain any water that is still in the pot. Let cool before making the cakes.

Gently fold the ingredients together until well mixed. Using a 1/4-cup measuring cup, scoop the mixture and shape it into a 3-inch-round patty. Repeat with the remaining mixture to form 8 patties.

Coat a large nonstick pan with olive oil (2 to 3 tablespoons) and set over medium heat. When the oil is hot and shimmering, add the patties in a single layer, spacing them an inch apart. Cook, turning once, until browned on both sides and heated through, about 5 minutes total. Garnish with fresh cilantro and serve with lemon wedges for squeezing fresh juice on top. Makes 8 patties.

— From “Mastering Spice: Recipes and Techniques to Transform Your Everyday Cooking: A Cookbook

Tikka masala is an example of a catch-all simmer dish that you can make to use up any number of proteins and vegetables. Swap the paneer for chickpeas and the cauliflower for squash for a different but equally delicious result. If you’re working with leftovers, add the already cooked ingredients toward the end so they don’t get too mushy.

Put the cashews, saffron and mango chutney into a pitcher, cover with 3 cups of boiling water and leave to one side to soak. Heat the broiler to high.

Finely grate the lemon zest into a large bowl, add the yogurt, paprika, a pinch of sea salt and black pepper and 1 tablespoon of oil, and mix well. Chop the paneer into 3/4-inch cubes and break the cauliflower into florets (roughly the same size), then toss in the marinade. Tip into a large roasting pan and broil on the middle rack for 12 minutes, or until beautifully golden and gnarly at the edges.

Put the butter and 1 teaspoon of oil into a large casserole pan on a low heat with the cinnamon and cloves, and bash the cardamom pods, adding just the inner seeds. Peel, finely slice and add the garlic, and cook for a few minutes, stirring occasionally. Peel the onion and ginger, roughly chop, then place in a blender with the tomato paste and a good splash of boiling water, and whiz to a paste. Pour into the pan and cook for 10 minutes, stirring regularly.

Tip the cashew mixture into the blender and whiz until super-smooth — you may need to work in batches. Pour into the pan, bring to a boil, then simmer for 5 minutes, stirring occasionally. Stir in the paneer and cauliflower, season to perfection with salt and pepper, then place under the broiler. Once golden and bubbling, stir back through and pick over the cilantro leaves. Delicious served with fluffy rice and wedges of lemon for squeezing over. Serves 4.

— From “Ultimate Veg: Easy & Delicious Meals for Everyone

This soup, or a version of it, is a good use for leftover whole black beans. If you have leftover soup, use it in huevos rancheros, black bean shakshuka or enfrijoladas, which are enchiladas but with a bean sauce instead of a chili sauce. This soup is a good candidate for pressure cooking, but reduce the amount of water to 5 cups. Cook at full pressure for 30 minutes, and allow the pressure to release naturally for 15 minutes. You’ll need to cook the beans for about 50 minutes if they haven’t been soaked in water overnight.

1 pound dried black beans, rinsed and picked over and soaked in water overnight

Heat vegetable oil in a soup pot over medium heat. Add onions and cook, stirring, until softened, 6 to 8 minutes. Add garlic, peppers, spices and salt and cook for another minute.

Drain the beans, if soaked, and add to the pot along with vegetable stock. (Use 5 cups if cooking in a pressure cooker.)

Bring to a boil, then reduce the heat and simmer, partially covered, until the beans are completely tender, about 1 hour 15 minutes for soaked beans and 2 hours for unsoaked. Scoop 2 cups of beans into a small bowl or food processor and mash or process.

Stir the pureed beans back into the soup and simmer for 5 minutes more to thicken. Taste the soup and season with more salt if needed. Serve in soup bowls with: sliced avocado, chopped cilantro, hot sauce and lime wedges. Store any leftovers in the fridge for up to a week for use in other meals. Serves 6.

— From “Joy of Cooking: 2019 Edition Fully Revised and Updated