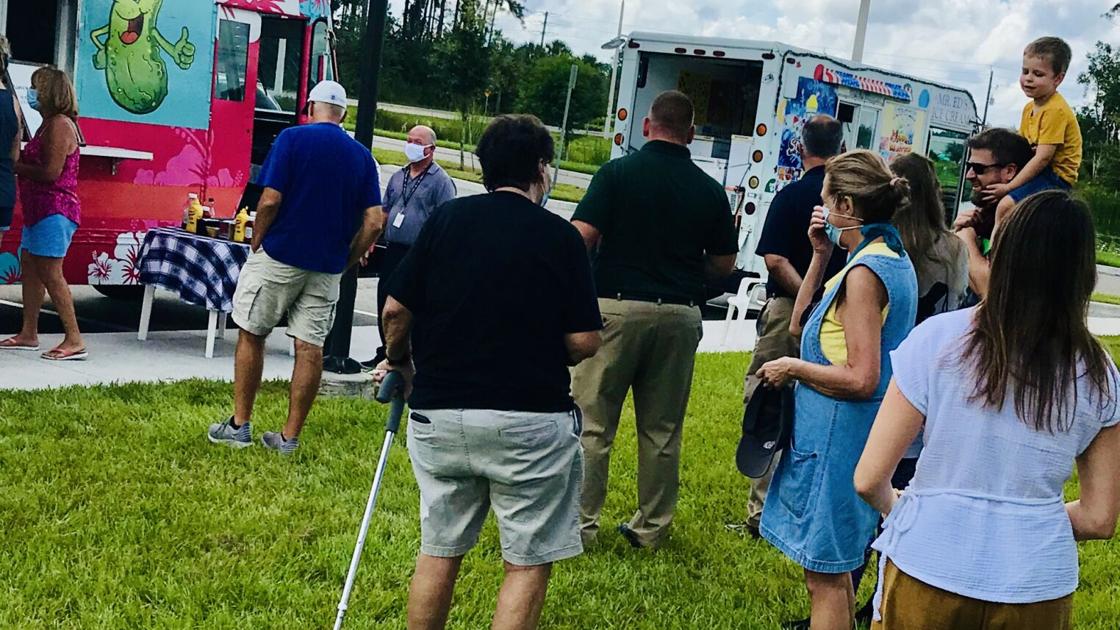 Whatever their history, food trucks are here to stay. They’ve also been embraced as fundraising vehicles, even in a local town that once declared, “No food trucks here!”

WILDWOOD SOUTH DOES IT WITH LOVE

It breaks your heart, not going to Wildwood this year.

You miss its honky-tonk Jersey Shore boardwalk, mammoth slices dripping with cheese, souvenir shops that hand each customer a free hermit crab, a tubful of Curley’s (Best Fries in the World).

A Hoboken on the beach, a waft of grease and sugar all mixed up with Atlantic salt air, it’s where Mike Barone’s family migrated every summer to make pizza on the boardwalk.

“That was a very happy time for me,” he said.

So, after launching Pioneers Pizza Port Charlotte and the Trippin’ on Pizza truck, Barone and Bianca Hannigan are re-creating a retro boardwalk experience in the heart of Punta Gorda.

The little space behind Pomegranate & Fig had been home to a short-lived series of ventures. Now gutted to the studs, it’s become a 1970s white-tiled slice house, complete with orange grout, a wall-sized Ferris wheel mural and a faux-boardwalk stamped cement floor.

Outside, its formerly enclosed patio opens out onto the brick pathway connecting W. Marion Avenue and Herald Court, inviting passersby into a string-lit courtyard with music, wine and beer until midnight all week and 2 a.m. on weekends.

The building’s owner badly wanted Barone to be there, part of the fabric of downtown.

“I couldn’t turn it down,” said Barone. “Trippin’ on Pizza was like a lab experiment for us, until we perfected a product that crushed it wherever we went. Those flavors combined with a 16-inch round or square, thin-crust Jersey-style pizza? We’re going to have something really cool here.

“This is a passion project just like the truck was. If you do it with love, it works.”

Never mind your take-and-bake gluten-free, vegan and keto, Mike. Can you pleeeeze make a pie with a Curley’s Fries crust?

No, it’s not beer cheese, despite what Spanish 101 might suggest.

Quesabirria, with its signature reddish corn tortillas, cheese, meat and a side of consommé “jus” for dipping, is a trendy new take on the taco. Fueled by irresistible Instagrams, quesabirria exploded in southern California about a year ago.

He started it as a special offered nowhere else in Charlotte County. Soon, lines of customers clamoring for quesabirria convinced him to put the dish on his permanent menu.

The “quesa” part of its name indeed comes from “queso,” or cheese. “Birria” is Mexican stew traditionally made with goat or lamb. Cortes makes it with crowd-friendly beef instead, slow-cooking sirloin steak in a mixture of spices and reddish-brown guajillo chili peppers for six hours until it falls apart in shreds.

“The spice mix, including salt, cumin, clove and cinnamon, is what makes it different from any of the other meats we have,” he said.

It’s also what makes it addictive.

The flavored meat is served, traditional Mexican style, with cilantro and onions, on a grill-seared, crispy corn tortilla topped with cheese and moistened with birria grease, which gives it that glistening, rusty look. A side of reserved broth is for dipping or sipping.

You won’t want tacos any other way once you’ve slurped down one of these cheesy, spiced packets of slow-cooked steaky-ness.

Three-year-old Shannon Staub Public Library, on the campus of Suncoast Technical College in North Port, has had a rocky time of it, and not just because of a pandemic that forced it to cancel a major fundraiser.

It’s hard when people don’t know you’re there or open to the public, or think the only North Port public library is the one on U.S. 41.

It’s also hard for the surrounding community and industrial park, which lack restaurant dining options for a quick lunch.

Librarians being a clever lot, the 501(c)(3) Friends of Shannon Staub Public Library came up with a win-win: host Food Truck Fridays to feed neighbors, the college and library staff every Friday from 11:30 a.m. to 2 p.m. All trucks pay a nominal fee, and there’s a Friends Donation Jar.

The first Friday event had a socially distanced line congaing around the library, including an entire nursing class, industrial corridor workers and the North Port Newbies & Oldies Facebook group on their first outing together since the pandemic began. For the second week, the Friends advised the food truck entrepreneurs to take pre-orders and prepare lunches prior to the lunch rush.

Seth and Amaris Leto of Punta Gorda, like many others, first discovered Don Smith’s now-retired Kona Ice truck at a school event. Now they’re cruising for a cause, as a family, with their own philanthropic Kona Ice truck. Son Ryder, 10, and daughter Mila, 6, supervise.

At every stop the couple gives back a portion of sales to different organizations, continuing the mobile franchise’s nationwide tradition of donating thousands of dollars every year to local school groups, teams and community organizations.