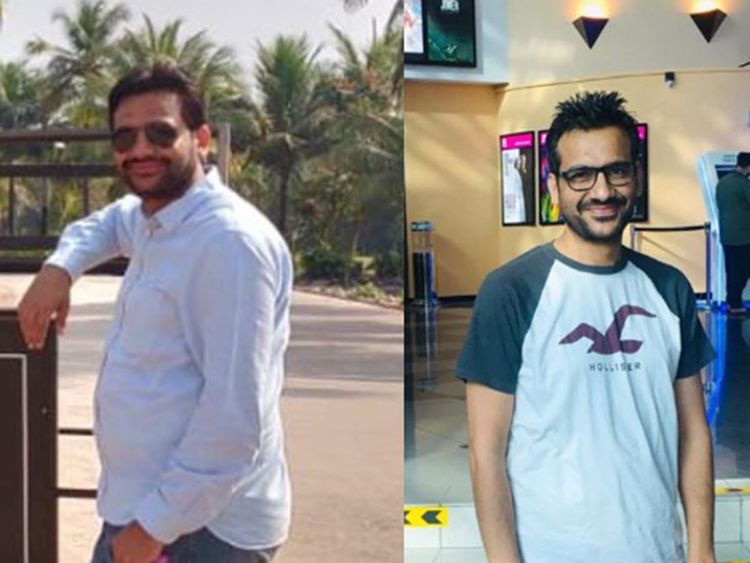 Ajay, before and after Image Credit: Supplied

It was difficult for 34-year-old Ajay Chaudhary to see a friend of his lose 10kg while he himself filled out. But it was also inspiring, because, he thought: “If he can do it I can also do [it]”.

Chaudhary, who has been in the UAE for 9 years, hails from Rajasthan in India. In his 96kg days, he would eat two parathas for breakfast, four chappatis for lunch and another four for dinner alongside oil-rich curries. He would also sip on three-four cups of tea with milk and sugar.

Sugar is an addictive substance; quitting it comes with a physical price. Which Chaudhary learned first-hand about two months ago when he decided to go cold turkey. “Initial 4-5 days was very difficult, I got headache[s], I was feeling like I can die. But I controlled [myself, and] after 4-5 days it was ok,” he tells Gulf News in an interview.

His 10kg-slimmer friend had gone down the Keto route, and having heard good things about it, Chaudhary was eager to give it a shot. But then came the second hiccup; he read up what that meant. Keto is a high fat, low protein, minimal carb diet that forces your body to produce ketones that basically chomp up the fat for energy.

For the duration of his programme, he decided to eat eggs. And the next 21 day unfolded with spectacular chaos. “Keto I did for only 21 days [during which] I lost about 8-9kg,” he says.

“In the morning I was having egg or green tea, then in lunch I was having only avocado, that’s it. And in dinner I was having raw paneer, or paneer tikka, or omelet,” he added.

To get himself through the symptoms best known as the Keto flu, he religiously took vitamins. He began to drink a couple of cups of green tea.

After he lost his initial flab, Chaudhary began to veer back towards carbs and to compensate for the added calories added exercise into his regime. He began to walk a humble 2 kilometres a day.

And he continued to drop the kilos.

His food habits fell more into the mainstream. “I’m not eating dinner basically and I’m having my regular breakfast – green tea and toast or paratha or something like that. In lunch, I’m having chappati 2 or 3. And in dinner I am having only salad,” says Chaudhary.

Today the once-96kg man is down to 82kg with a plan to hit the late 70s. You see, he giggles, “I feel much more confident, I can wear good clothes. When [people] saw my picture, they got surprised actually. ‘How you did this?’ everyone asked me. I feel good.”

More energy, more confidence, more self-assurance. Plus, it’s got his 5-year-old daughter’s seal of approval. “My daughter also says: Papa, you are now very much slim,” he says.

And what more could you ask for, really?

UAE weight-loss: “I thought I would die on this diet” – Gulf News