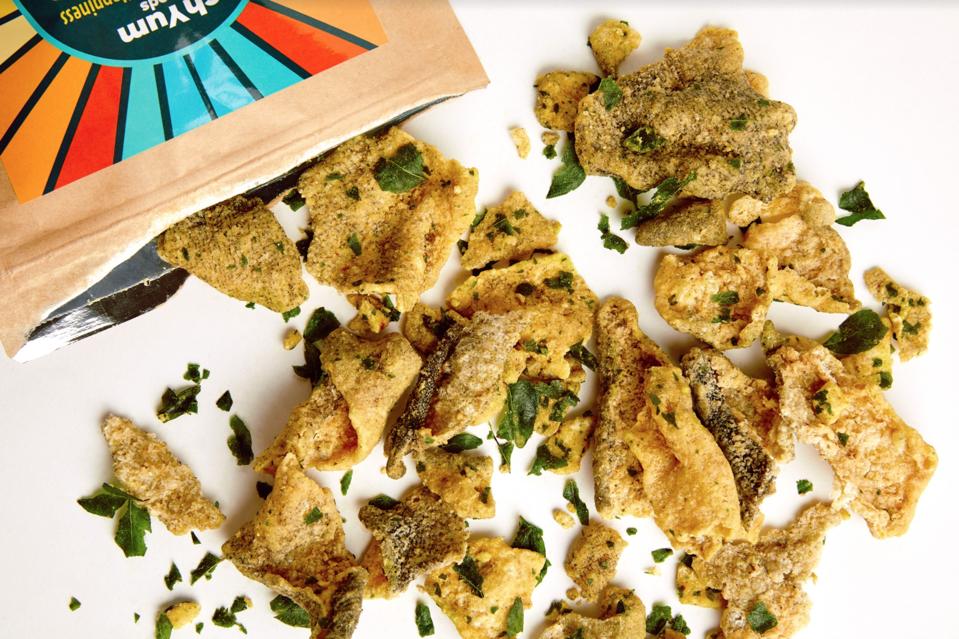 If you haven’t heard of fried fish skins it may sound like an off-putting snack at first. But take a snacking cue from Asia, where this snack food has exploded in recent years, and give it a taste. You’ll quickly understand why it’s become one of Asia’s most popular and addictive snacks. Fried fish skins come in several varieties, but the most indulgent is the salted egg flavor, which originated in China centuries ago.

Salted egg is common in South East Asian cuisine and fried fish skins with salted-egg sauce is a traditional dish. What’s relatively new, and the part we should all be excited about, is the packaged-snack version which was introduced in Singapore a few years ago. A place where fish skin snacks have particularly grown in popularity and has expanded throughout Asia.

Back in 2017 you couldn’t find these chips in the U.S., except a few places like Amazon, leaving a high demand for the snack in the States and an opportunity for those who want to jump into a market that has already proven lucrative overseas.

Enter chYum foods, a San Francisco based snack company on a mission to spread the goodness of fried fish skins to the snack-loving American consumer.

chYum Co-Founders Kimberly Adolfo, Clarence Cheuk and Sam Liu have spent over a year researching and developing a select blend of seasonings and spices to create the best gourmet version of the salted egg fish chip snack. And for the U.S. market, that also means being MSG and gluten-free to cater to the healthy crowd. 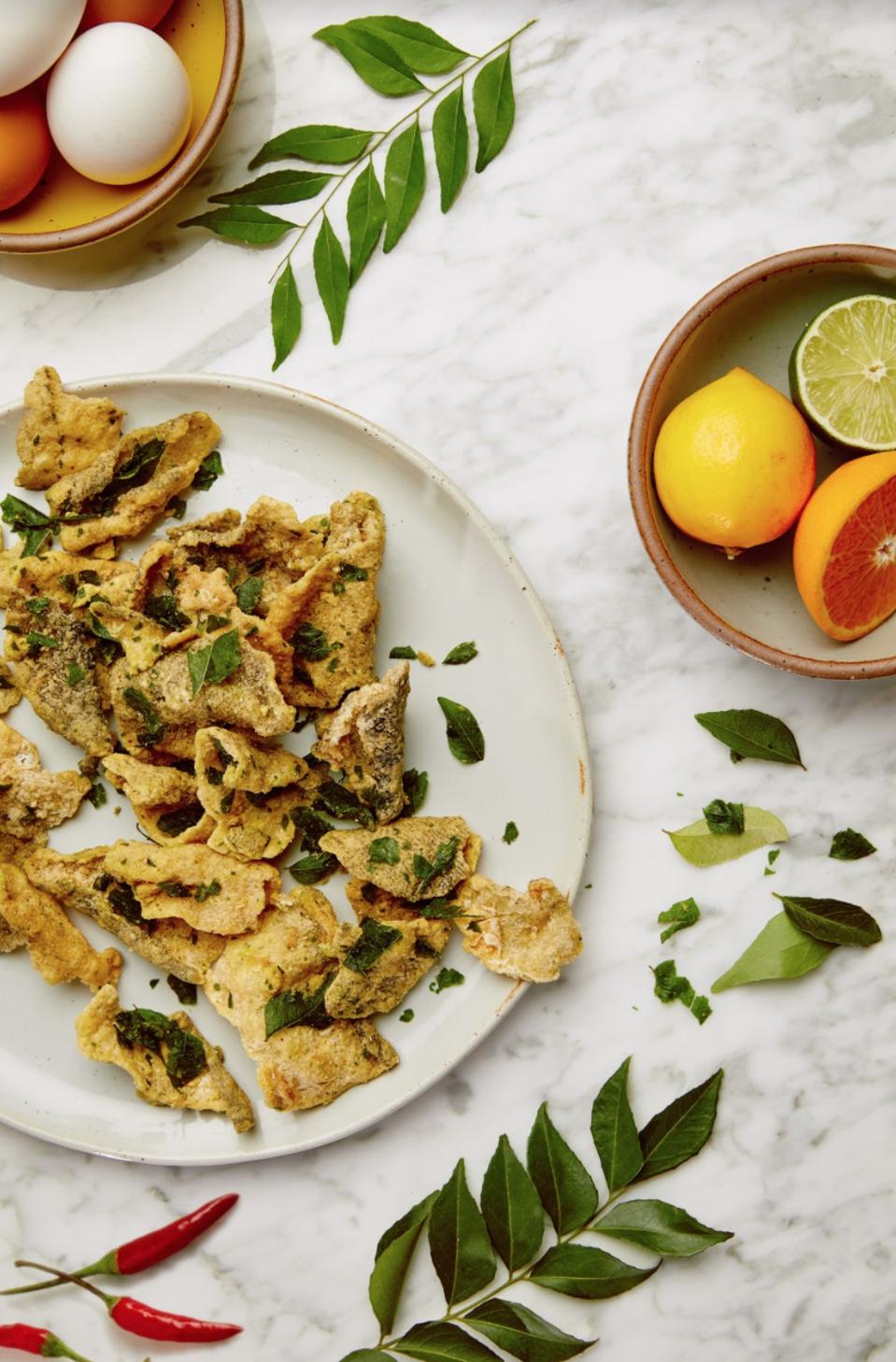 Moreover, they’ve spent countless hours diving into the rules and regulations of importing/ exporting fish skins given the hefty import restrictions prohibiting certain kinds and forms of fish to be shipped. chYum uses wild-caught fish from the Atlantic ocean which are imported to Vietnam, a place accustomed to importing Atlantic fish, where their product is manufactured.

They recently launched their premium salted egg snack in the U.S. market, both online and at local retailers throughout the San Francisco Bay Area, Los Angeles and New York City. We chatted with the co-founders on their inspiration, challenges, product and more below. Here’s what they had to say.

What was your inspiration to start chYum foods?

Starting chYum was an accident, really. Clarence and Sam are longtime friends and knew each other when they worked in Hong Kong. Clarence I are neighbors. One Saturday morning we went for a walk with our dogs and Clarence said, “Hey, I want you to try something.” We went back to his apartment and he handed me a bag of salted egg fish skins, Singapore’s souvenir snack. I ate it and went, “Mmmmm… YUM!”

I recognized the tastes and textures immediately; it was similar to the traditional dish. It also reminded me of my favorite Korean side dish, Myulchi bokkeum (or myeolchi bokkeum), and there’s a very common Filipino side dish (I don’t know what it’s called) that has salted duck egg, diced tomatoes, onions and vinegar (it’s kind of a salsa) that pairs with fried fish or other fried dishes which I adore. And it was all in this snack!

We thought that if we could create a version that had no MSG and was gluten-free then it would be perfect for our needs and may be a better fit for our American market. 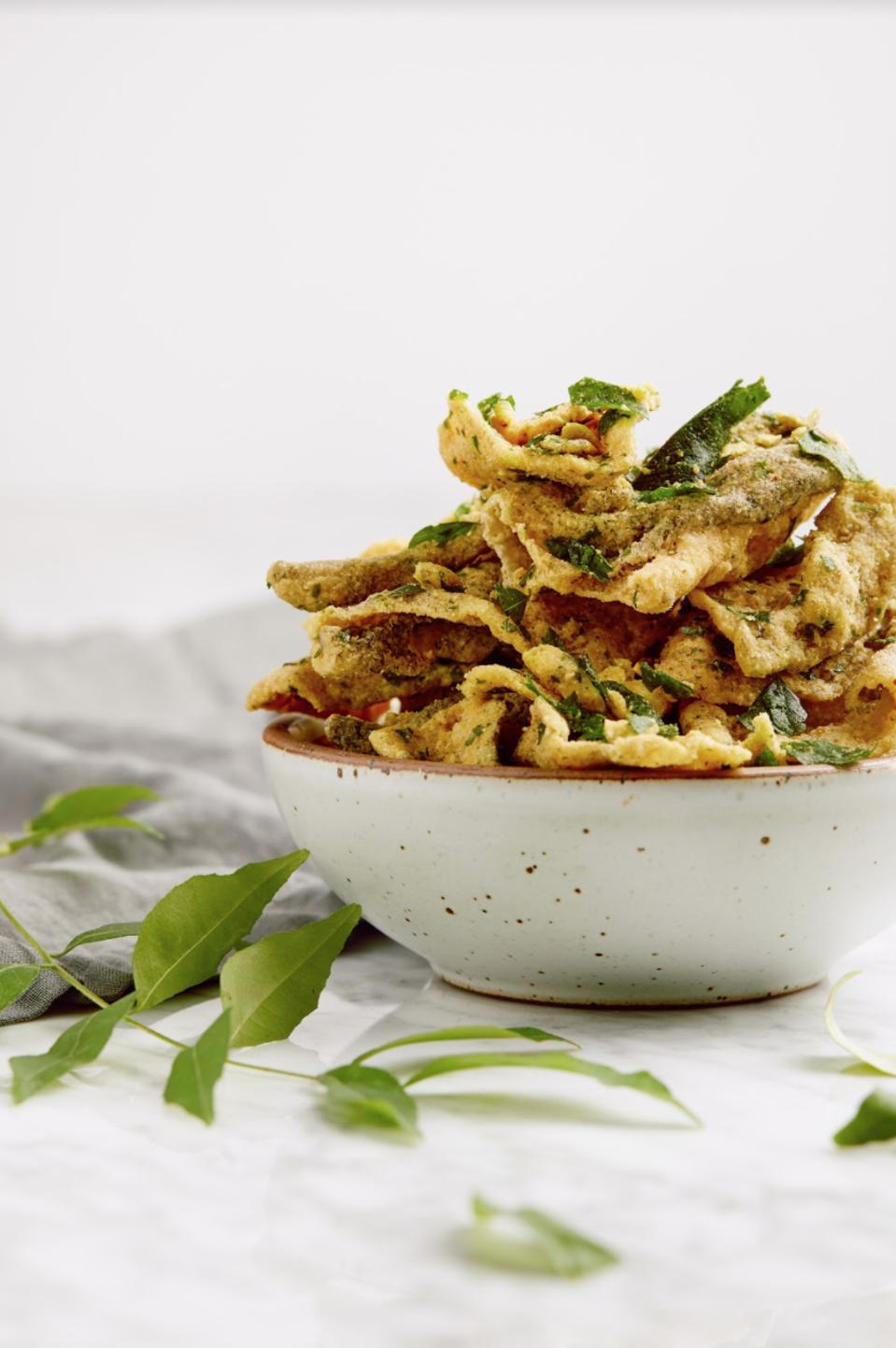 We had to rely on friends bringing them back from their trips to Asia which was asking a lot because people were waiting in line for an hour to get them. So we thought, “We should do this.” We asked Sam if he wanted to join and luckily he said, “Yes!” We’re fortunate that he came on as a Co-Founder because he truly balances us.

You created a gluten-free version and left out the MSG. Did you intend for this to be a healthy snack?

Not necessarily. Clarence follows a keto-friendly diet so he was excited to work on a product that fit his diet. I’m allergic to gluten, so we had to use tapioca flour instead of wheat flour. And we all like MSG but we did a tasting early on and got feedback to leave it out.

Something Sam likes to point out is that even though we’re not a “healthy snack,” there are benefits to eating fish skins. They are nutrient and collagen packed, high in protein, and a great source of omega-3s. So in that sense, our snack could be considered “healthier”.

Also, our fish skins are also 100% upcycled, meaning that we use a part of the fish that would have otherwise been wasted and transformed it into its own product. Other examples of this would be making pesto from carrot tops or making vegan mayonnaise from aquafaba. This is important to us because one of our goals is to create snacks that are good for you and good for the earth and we’re headed in that direction with our fish skins.

What was the catalyst in turning a mere idea into a fully-fledged start-up company?

It started as a passion project with us working on answering simple questions: Can we get fish skins? Can we make a premium seasoning blend in the U.S.? Will people like it? At some point, we asked ourselves who we envisioned our target market to be and we quickly realized that creating a product in an industrial kitchen to sell at farmer’s markets was too small. We had a product that could really reach a great many people in America, so we formed chYum to answer those questions at scale. 18 months later we had our specialty snack. 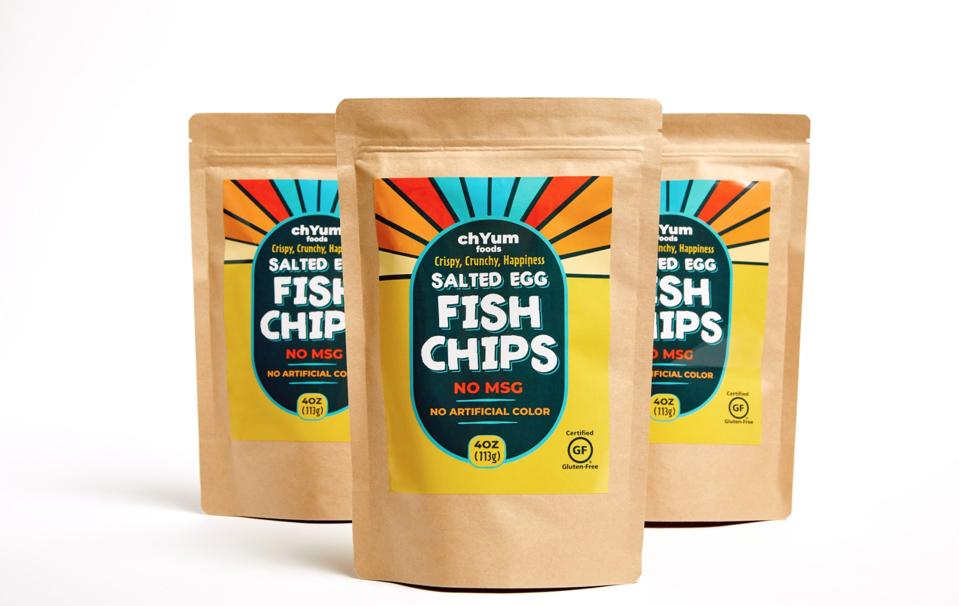 For someone skeptical about trying fish skins for the first time, how would you describe the snack food?

Some have described our gourmet snack as “dim sum in a bag”! It’s fun to experience the velvety, creamy and complex flavors (an umami blend of salty and sweet) with the crispy and light fish chips which are blended and balanced nicely with the  inimitable and “unsubstitutable” (thanks @PadmaLakshmi) curry leaves. Curry leaves are not related to curry powder. It’s a common misconception that they are one in the same, but in fact, curry leaves are more similar to bay leaves. Their herbaceous profile is so good and what makes this snack!

Crispy fried fish skins are the best part of any fish, but it has to be done correctly. Using a fish skin with a mild flavor profile vs. a pungent one is key. That way the flavors can really come through and be showcased. We’ve tried a lot of fish skin snacks and when the end result is anything less than a crispy, crunchy chip that isn’t “fishy” then it’s a complete disaster.

Recently I saw Chef Jamie Oliver’s little son, Buddy, cooking “crispy skin fish” on Instagram TV and his technique is perfect. His fish skin had a beautiful golden and luscious sear to the outside and you could tell that it was so crunchy and yummy. When it’s like that, you just can’t stop eating it. I think it was his little brother’s favorite part of the fish!

What were some of the difficulties in creating such a unique (at least in the U.S.) product in terms of the seasonings and taste?

It was important to us to make our premium seasoning blend here in the U.S., so we thought it may be challenging to find a team who could take all of the ingredients from our kitchen and translate it into a formula. Turns out, that was actually the easy part. We learned that in order to create a great salted egg seasoning blend, it was imperative to specifically collaborate with partners that have their own experience and memories with salted egg, otherwise we would have to reverse engineer a seasoning blend and that would be almost impossible. 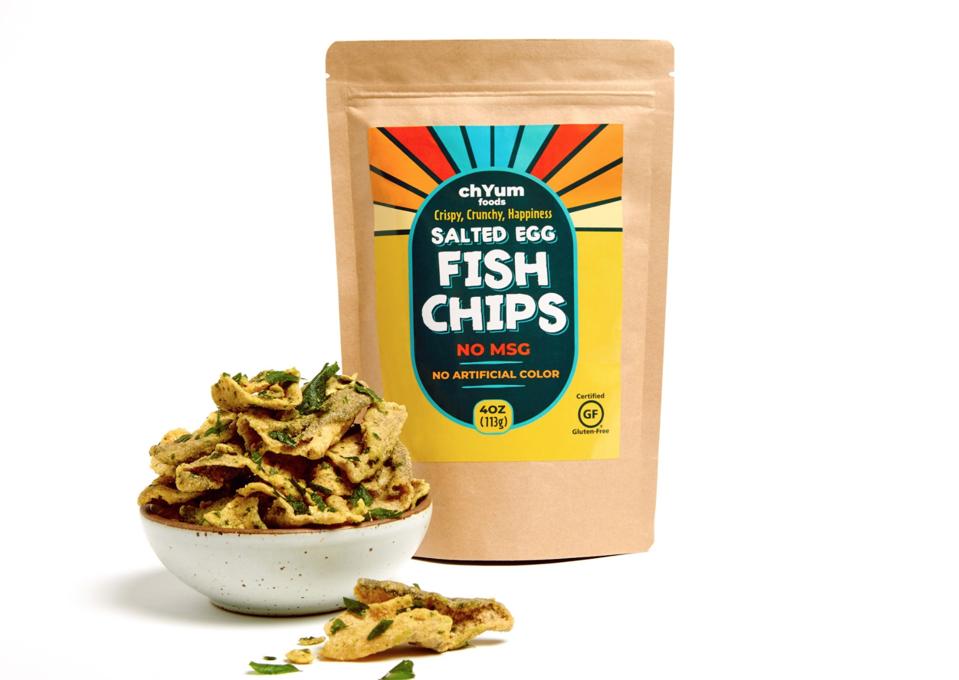 With no memory of salted egg dishes, then there’s no way to understand the levers of the flavor, no way to understand how to balance the taste. So that was the difficult part: finding the right team that possessed shared memories of salted egg and could recreate that experience into a seasoning blend. Once that fell into place, then it was a lot of fun crafting our premium product.

Looking forward, do you think international snack foods will gain popularity in the states?

Definitely! Snacks are just culinary dishes abbreviated, and with all of the globally inspired cooking shows and endless food content on Instagram, the world is opening up and people are looking to discover new tastes or try that dish that they saw on someone’s IG story.

Specifically for snacks and beverages, we feel that there is a huge opportunity to disrupt the current market with Asian Pacific flavors and we’re thrilled to be sharing our debut snack with everyone. You can check out our Instagram at @chYumfoods, our Twitter at @chYumfoods and on Facebook.

This Asian Inspired Snack Is Your Next Obsession – Forbes