Stuffed, and with 94 versions of poutine still to go, I stagger out into the ice-bright air where cold slaps my face and filches the breath from my lungs. No wonder this comfort food is so popular here, where the winter chill burns up calories so fast you’re hungry almost as soon as your last meal has ended.

But no matter, for sustenance is abundant in this city, in the moody bistros warmed by open fires and infused with the smell of French cooking, in the chic restaurants that marry the region’s seasonal foods and flavours – wild mushrooms and sea-buckthorn from the boreal forests, seafood from the Gulf of St Lawrence – with the city’s rich European tradition.

It’s easy, then, to be lured away from routine poutine by the charms of this city’s cuisine. At night, when the snowflakes are swirling about in snow-globe extravaganzas, I dash into the warm embrace of Ophelia, an exposed-brick space where animated groups dine on braised veal tongue paired with shrimps, and seaweed-fed lamb.

I order the bouillabaisse made with lemongrass-infused coconut milk and a miscellany of fresh seafood and finished with a curry aioli. It’s the very antithesis of poutine – fresh and fragrant and light enough to allow for dessert – yet it encapsulates this region and its rich blend of immigrant cultures every bit as well as that old staple.

I’m hungry again next morning – yes, the cold is a marvellous digestif – so I slip from the slush-coated Rue St Jean into Le Local, a bright space filled with the work of local artists and artisans and suffused with the scent of just-baked goods.

I order my second helping of poutine from a fast food outlet at Quebec City’s airport. It’s served in a paper cup and smothered in stringy curd and gravy.

Customers sit on second-hand chairs, spread out their newspapers on vintage tables and eat their breakfast using crockery and cutlery brought from home (they’ll receive a discount for their eco-friendly efforts). My own order – crêpes filled with cheese and béchamel sauce – is a relatively guilt-free choice: the cafe’s suppliers are selected for their environmental credentials.

For lunch (yes, I’m positively ravenous), I steel myself against the cold, find my way to Hôtel Le Concorde Québec and take the lift to the 28th floor, where Ciel! Bistro-Bar is slowly rotating. I order the goat’s cheese with crunchy salad, oatmeal and blackberry vinaigrette, but can barely focus on it, so mesmerising is the 360-degree unfurling of the snow-dusted city.

Heading home a few days later, I order my second helping of poutine from a fast food outlet at Quebec City’s airport. It’s served in a paper cup and smothered in stringy curd and gravy. Two down, I sigh, dipping a chip into the surprisingly tasty concoction, 93 to go. 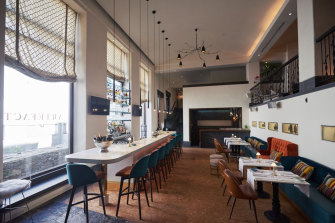 Auberge Saint-Antoine has objects dating back to the 1600s. Credit: 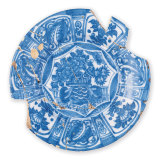 A place by the river
The elegant, family-owned Auberge Saint-Antoine is right at home at the foot of the ramparts beside the St Lawrence River in Quebec City’s Old Port – once one of North America’s busiest ports. Inside, guests and visitors can discover the gems unearthed during the reconstruction of the three historic structures that comprise this Relais & Châteaux property. Objects dating back to the 1600s – pottery, glassware, implements – are displayed throughout the hotel and serve to illuminate more than 300 years of Quebec City’s history.
saint-antoine.com

Coming in to the cold
The Hôtel de Glace comes and goes each year, first emerging from within solid blocks of ice as winter approaches and gradually diminishing as spring turns it to meltwater. Now in its 20th year, the hotel is carved anew to a theme from compacted ice each winter. Guests can use the outdoor spa and sauna before bed. Should things turn too icy, they’re assigned a suite in the adjacent Hôtel Valcartier.
valcartier.com 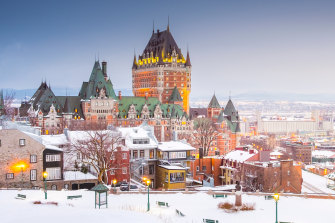 In the snow, Quebec City’s Fairmont Le Château Frontenac looks like something out of a fairy tale. Credit:Getty Images

Fairy tales do come true
Quebec City’s skyline would be incomplete without the turrets of its fairy-tale centrepiece, Fairmont Le Château Frontenac. Step out of the hotel’s front doors and you’ll find yourself on Dufferin Terrace, overlooking the expansive St Lawrence River and enfolded within the walls of the UNESCO World Heritage-listed Old City.
fairmont.com/frontenac-quebec

To read more from Good Weekend magazine, visit our page at The Sydney Morning Herald, The Age and Brisbane Times.

Catherine Marshall started her career as a hard news journalist in her native South Africa as a naive 20-year-old. More than two decades later the Sydney-based writer specialises in travel writing.

Quebec’s poutine is anything but routine – Sydney Morning Herald