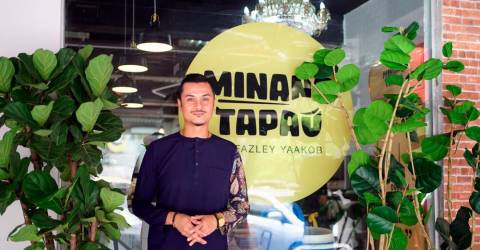 Fazley takes pride in traditional recipes, especially in rich and aromatic Negeri Sembilan cuisine, with ingredients such as coconut milk and turmeric, and aims to promote authentic flavours across the international culinary scene.

“The major challenge is to convince foreigners to take the first bite. If I cook rendang, daging salai lemak cili api and tempoyak, the fragrance may not be familiar to many people,” revealed Fazley, an accounting and finance degree holder from Victoria University of Wellington in New Zealand.

“Once they take a bite, I am not worried anymore. I will win them over. It is always about convincing people to try something new or unfamiliar.”

From Rembau to Paris

A pastry and culinary chef, Fazley learned about French smoked beef, chicken and seafood cooked over wood chips while studying in Le Cordon Bleu in Paris.

“I told myself, if I want to champion food, it has to be something which I have grown up with. I remember the days when I was helping my grandmother to cook meat in the traditional style over a wood fire in our kampung.”

Realising the similarities between Western and Rembau cusine, Fazley smoked meat marinated with turmeric, and surprised a group of renowned chefs with the taste.

“That was my turning point,” recalled Fazley, whose cookbook My Sucre Story won the Gourmand World Cookbook Award in 2016.

Fazley also feels that if the culinary world can embrace French food names such as macarons and filet mignon, and even cooking jargon like “saute”, then it should have no problem adopting Malaysian names for food.

“Why can’t we keep the (food name) recipes in the Malaysian language? Why can’t Westerners use Malaysian words like daging salai lemak cili api?,” asked Fazley, who has successfully married French flavours in traditional Negeri Sembilan cuisine in SukaSucre.

“Although my (first) recipe book is bilingual, I simply named the recipes as they are. I refuse to change the name of popular Malaysian food for the sake of [Western readers].”

Back to his roots

In France, chefs from various districts specialise in their local cuisines, and cook with local ingredients. “As a chef, I want to stay true to local ingredients and traditional recipes, and (stay true to) where I come from,” said Fazley, who still refers to himself as a “kampung boy”.

“Back in my kampung, my grandma prepared daging salai lemak cili api and rendang, which is now available on Minangkapau’s menu.

“Each time I start the fire to cook in the kitchen, it brings back memories of my grandma.”

“My grandma, my mum (Datin Umi Kalsom), who runs a cooking school, and my wife, who also shares the same love for authentic Negeri Sembilan food, are my biggest influences,” added Fazley, who also names British chef Gordon Ramsay as an inspiration.

Fazley said the Michelin-starred chef excels as a father who nurtures his children, and never shies away from learning new recipes, even trying his hand at Asian street food.

On Sept 2, Fazley launched a small food station named Solero Keto within MinangKapau. Food hunters can enjoy healthy food options based on the ketogenic diet, including scrumptious French pastries made without sugar, or using Lakanto (a plant-based sweetener).

“I stumbled upon the keto diet as I was seeking out the best diet system,” said Fazley, who was concerned over his children’s weight.

“I want to change the stigma or mindset that a person can’t enjoy [simple delights like] teh tarik or fried noodles while on a diet.”

He came up with the menu for Solero Keto after seeking advice from dieticians, nutritionists and doctors regarding suitable ingredients.

Although Fazley plans to open a proper Solero Keto restaurant in the future, customers may order items from the Solero Keto menu while dining-in at MinangKapau or via delivery service GrabFood.

Aside from whipping up unforgettable desserts, Fazley is known as a singing chef, and never finds it hard to balance both careers.

Currently, the Asmara Ini singer is working on another cookbook, and recording his next album. Biarkanlah, the first single from the upcoming album, is expected to be released next month.

“Whenever I cook, I sing and whenever I sing, people will ask me for cooking recipes,” Fazley said with a smile.